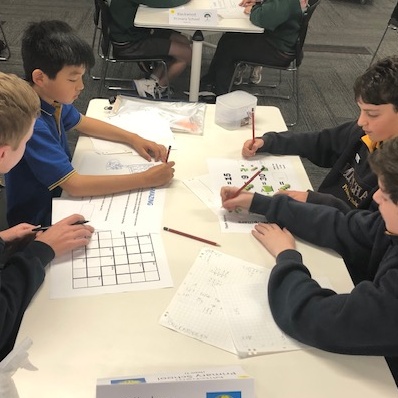 There was a real buzz in the room as teams from several schools worked collaboratively to solve mathematical challenges and beat the clock. The students had to think critically and creatively to solve puzzles, break codes, work out padlock combinations, collect treasure and diffuse a ‘bomb’. All of the students did really well and the MPS teams ended up coming 2nd and 7th. It was a fabulous opportunity for students to think mathematically and really stretch themselves.

The Mathletics competition at St Joseph on Monday the 14th of September was fun and interesting for all participants. My favourite part of this was when we got to work out how to defuse a bomb. My team failed to do this, which means I am writing this as a ghost. We had to work out the codes to combination locks to unlock more clues and eventually the pattern to stop the bomb exploding. One of the first puzzles was using a set of clues telling us that some of the numbers in each pattern were correct or not. Another one was a KenKen problem. KenKen is a puzzle like sudoku, but there are different shapes with numbers and operations in the corners, and all the answers have to be connected to each other by the operation and the number in the corner. It took us several tries to work out these puzzles and the other ones that we needed to solve to save ourselves from blowing up. When we were finally on the last problem, there was a loud bang, and that was the end of me and my teammates (what really happed was that the teacher running the competition told us to stop because time was up).
by Felicity

My favourite task was called ‘Rescue Me’. It started out with us solving simple logic puzzles, and after we solved these, we used our map to travel to a place in the school. With the help one of the Year 11 assistants, we found our way to one of the netball courts. We were told we had to find out how many 10cm by 10cm pavers would fit in one of the semi-circles. We measured what the radius of a full circle would be, then halved it. We squared our radius, and then times it by pi. As we only used 3.14, and not the full number, it was a little bit off, but we were still close enough. Then we went back to the central area, and Xavier was taken away and tied to a chair. (He wasn’t tied but was loosely strapped.) While we were solving more puzzles; Xavier was trying to figure out the code to free himself. Unfortunately, we didn’t finish in time, but it was really enjoyable.
by Lachlan

In addition to all those fantastic mathematical activities we were also given a considerable amount of bonus tasks. During the second task we were handed an orange sheet with approximately 30 seemingly random letters and numbers. These all had a secret meaning that we had to solve, for example: “50SITUSA” meant: “50 States in the USA,” “60MIAH” was “60 Minutes in An Hour” and so on. Every five of these that we solved earned us one bonus point. I was the one with the valiant responsibility of earning us a few extra points. There was also an extra task that could be attempted if I freed myself from that chair the was a part of the “Rescue Me” task. The goal was to find the number 1000 by adding five numbers, all of which had to include only the digit eight, eg: 88, 888. After returning from unsuccessfully attempting to free myself from the chair, I returned to my team and assisted them by decoding more expressions on the orange sheet. Lachlan took hold of the Eights sheet and worked it out with time to spare! This was the task in which we scored highest.
by Xavier